Berberis Vulgaris, and its health benefits

Dear interested reader, in this article you are going to learn about “Iranian seedless barberry by the scientific name of “Berberis Vulgaris”. In Iran we name this product  “Zereshk”. zereshk means a lot for people of south Khorasan province in Iran. This endemic product is a superfood rich in Vitamin C and Potassium and it can help your liver clean up of many toxic substances we are feeding it daily into our bodies. There are so much  you need to know about this health treasure of Iran and we will give you more information in the near future, take this as beginning.

Barberry (Berberis vulgaris var. asperma) belongs to Berberidaceae family and is an important endemic plant in Southern Khorasan province of Iran. The fruits of the plant
have been also used as a food additive. The plant is a shrub, 1–3 m tall, spiny, with yellow wood and obovate leaves, bearing pendulous yellow flowers succeeded by oblong red fruits (barberry) (Shamsa et al., 1999). The various parts of B. vulgaris including its root, bark, leaf and fruit have been used as folk medicine for a long time in Iran and other countries.
In pharmacological research, there is some evidence for different effects of the B. vulgaris or isoquinoline alkaloids of the genus Berberis (particularly berberine). There are also some clinical trials of the therapeutic effects of this plant or berberine . 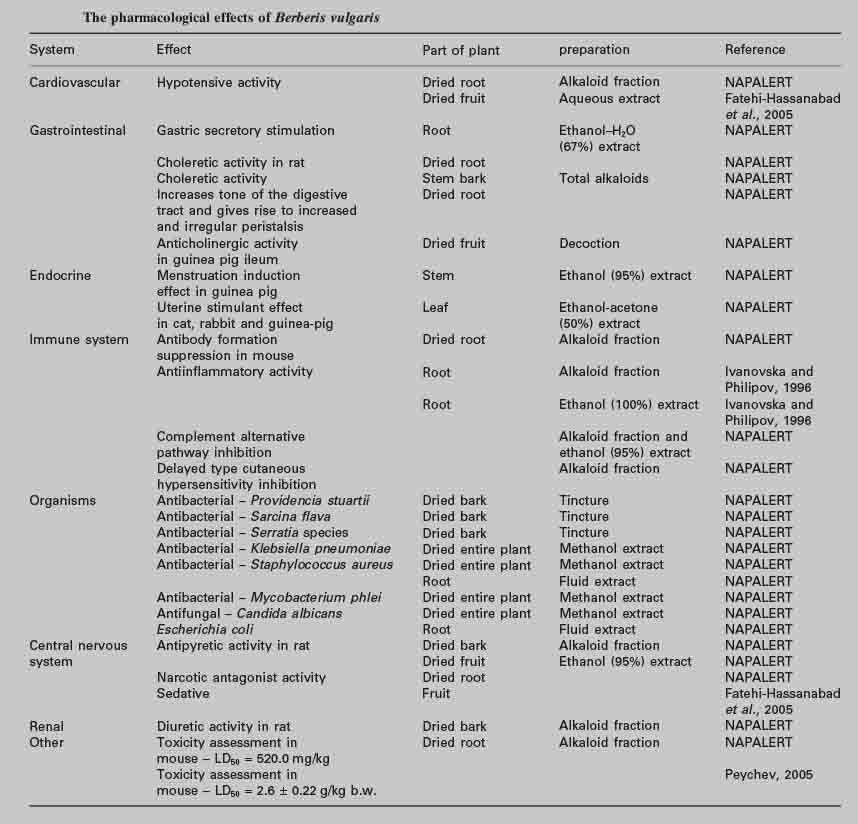 Studies carried out on the chemical composition of the extracts show that the alkaloid constituents with an isoquinolinic nucleus such as berberine, berbamine and palmatine are important compounds of this plant (Ivanovska and Philipov, 1996). In a quantitative HPLC analysis of the main alkaloids in the roots, barks and stems of B. vulgaris, the amounts of berberine and berbamine were 1.24% and 2.5%, respectively. Although berberine is the most important alkaloid that is generally claimed to be responsible for their beneficial effects and numerous studies have been conducted so far (Küpeli et al., 2002) but it is pointed out that other alkaloids also have some roles in the effects of the plant (Ye8ilada and Küpeli, 2002).
Berberine, an isoquinoline plant alkaloid, belongs to the structural class of protoberberines. Berberine represents one of the most studied among the naturally occurring protoberberine alkaloids (Mazzini et al., 2003).

More than 98 % of Barberry cultivation belongs to south Khorasan province and it dates back to more than 200 years. Iran is the only producer of Berberis Vulgaris in the world.

Barberry fruit has been used in the South Asian traditional medicine as drug. All parts of this plant were also used as a traditional medicine for long time in Iran. Barberry fruit is safe for human consumption and approved by FDA. Several properties such as antibacterial, antipyretic, antipruritic and antiarrhythmic activities for different parts of Berberis vulgaris have been reported.

Berberis vulgaris is rich in Vitamin C and has a high anthocyanin activity, this fruit is also rich in minerals, specially potassium and phosphorous. One of the very useful active constituent of Barberry is called berberine. The berberine is responsible for the many pharmaceutical effects of barberry fruit.

In the picture below you can find the chemical composition of the fruit, different forms of use and also some treatment effects by using the products containing Berberis Vulgaris. All parts of the tree containing fruits, leaves and roots has health benefits and can be safely consumed by human. Unfortunately this fruit is not well recognized in the world and also in Iran. One of the reasons for that is insufficient knowledge of the farmers and lack of infrastructures to produce products satisfying international standards and easy to use products made from Berberis Vulgaris. 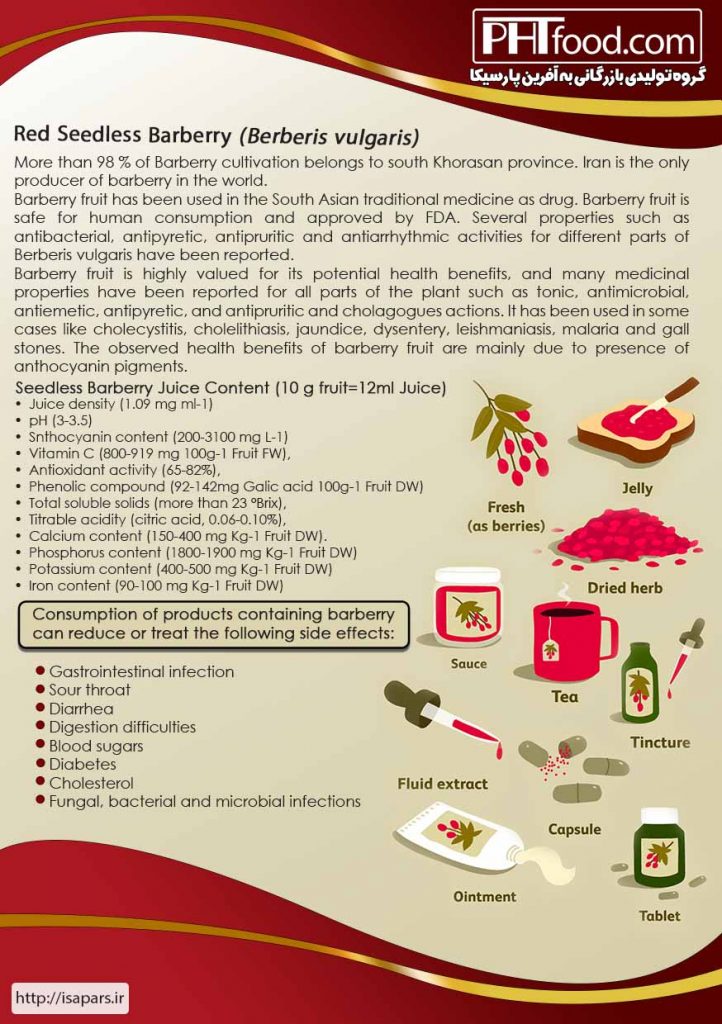 Unlike Iranian, many scientists in the world studied the Berberis Vulgaris and promising results has been published, which we pointing out to some of the in this article. In the tale below you can be informed of traditional usages of B. vulgaris around the world. 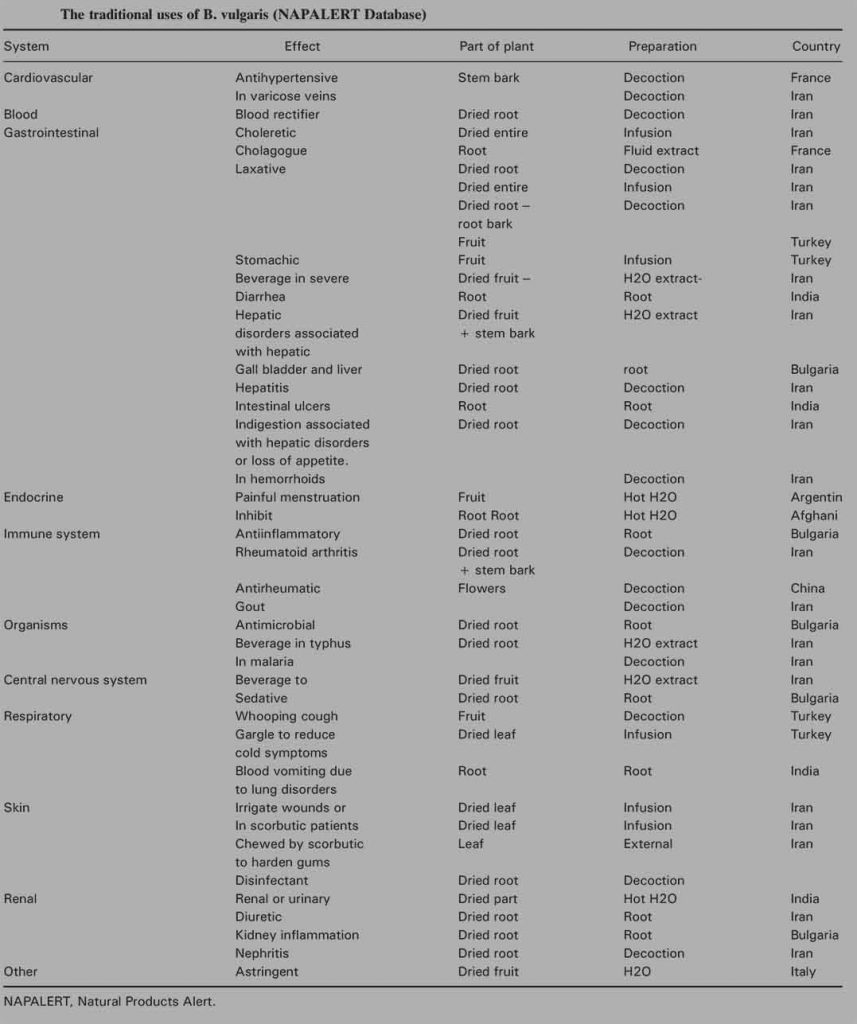 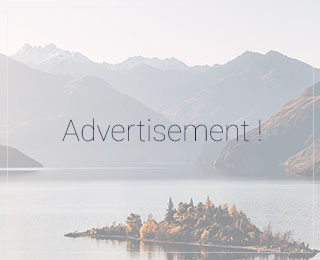